I’ve speculated a lot over the past few years and was just about to add the one to elf to my Holy Grail list when I saw this one had just come out and whoa, are they similar. I had been using the Remover Pencil from Shu Uemura for years until I discovered the ELF one. The Shu stick is kinda greasy and smeared makeup while removing it while the oil-free one from ELF was able to take off makeup mistakes easily and without messing up the rest of my makeup. 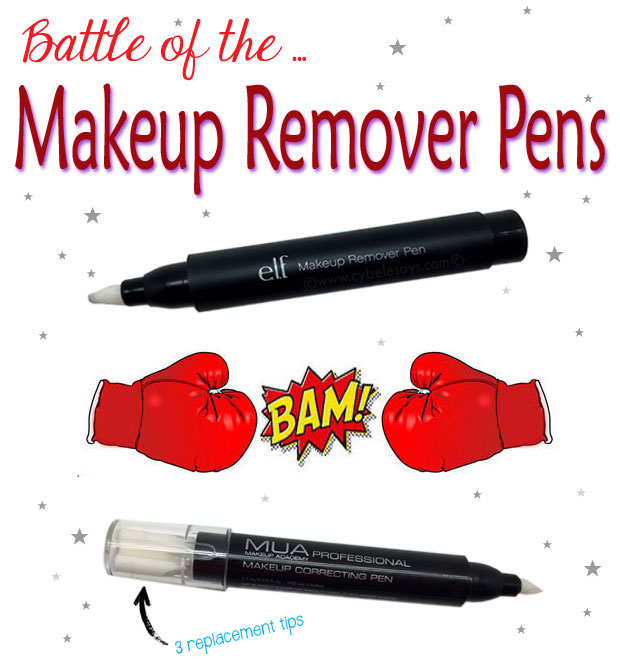 So welcome to the ring - MUA MAKEUP ACADEMY Makeup Correcting Pen ($8 @ muapro.com) and ELF COSMETICS Makeup Remover Pen ($3 @ ulta.com) to a showdown and the best one goes into my Holy Grail list!

Each of these has an air-tight cap to keep the removable fiber tip from drying out. Both are oil-free and don’t mess up makeup when removing a mistake. MUA one’s first ingredient is mineral oil (boo!) but it also comes with 3 new tips. No scent to either one.

Overall, these both seem to work really well at removing makeup without messing up your looks. One thing I don’t like about either of these is that the tips actually keep the makeup on them after removing it from your skin. So I keep a paper towel on my makeup table so I can wipe the tip before/after using it. There doesn’t seem to be any other way around that; it’s just part of the way these pens work.

So with all the other traits so close in comparison, the only thing working against the MUA one is the price, but the ELF one doesn’t come with 3 new tips, so I’m going with the one from MUA.

Disclosure: Some of these items were provided for review purposes. Some I bought.