My Name is Cybele and I Support Sweatshops 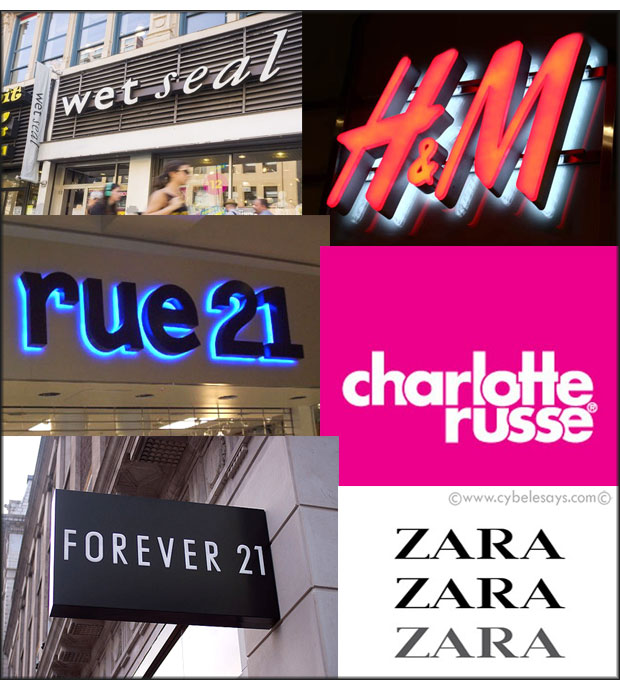 It seems really strange to admit the above because the word sweatshop is such a dirty word. And it’s spawned what has become something called fast fashion Fast fashion = inexpensive, low quality clothing and accessories. Places where one would find fast fashion would be H&M, Forever 21, Old Navy, Victoria’s Secret, Zara, Gap, Walmart and the like. New stock comes in daily so the consumer always has something new to look at and buy, which is what I and I’m sure people now come to expect.

I’ve gotten very caught up in some of the above stores over the years. I mean, why pay $25 for a bib necklace on discount shopping sites like Rue La La and Ideeli when I can get it at Forever 21 for about $5.80? It got to the point where I was visiting a Forever 21 every week for a few months just because I didn’t want to miss out on anything they put on the floor. The latest was great and all but just wait until next week where I might find something even better! My thinking was why not? My purse strings could handle it. I mean I wasn’t usually spending more than $50 in a whack, and that’s how I justified it. But sadly, it adds up. Not only the bills but also the useless clothing and accessories I had acquired, most of which I didn’t even want or wear. It was the thrill of the hunt that had me hooked.

The above was a cycle for me and also an addiction and right now I seem to be in the ‘off’ mode where I’m really scrutinizing purchases with, “will I really wear/use that?” and “do I need it?” 90% of the time the answer is no, so for now, I’ve been able to control it. But when will the urge strike again? Do I need help like Shopper’s Anonymous? While I’ve wondered both, I can see exploring it to find out what’s behind it and I also have the feeling I’m not alone.

It seems odd to me to talk about this topic on a site about beauty products and what’s coming out, but it’s just really struck me lately how huge fast fashion in this country. We want things now and at a really low price. So this got me thinking, where does it end? I mean, I can’t be 100% guilty of this without something there to feed my addiction.

Thankfully documentaries and things I have read online have helped me realize that I’m not the only one feeding the beast and companies in this category are making huge amounts of money but at whose expense? It seems all of ours but mostly foreign workers and the earth.

We’ve all heard about brands moving their manufacturing out of the country due to cost and I remember hearing about the horrible conditions in NYC sweatshops but those pretty much don’t exist anymore. By having items made abroad, the bottom lines are even broader and these big corporations have gotten used to having their garments made for pennies on the dollar, which is why they are able to sell it to us consumers for a super low price all the while still making a nice profit on each piece. It’s a vicious circle with no winners besides those at the top.

Two of my favorite brands, Stop Staring! and Pinup Girl Clothing, make their items in the US and the prices reflect that. Many times I’ve found myself wishing their items were less expensive but one has to pay for labor that is being paid at a fair living wage.

And the term ‘Made in America’ is a tricky one. Made can mean just assembled here but the “pieces,” so to speak, are created abroad, so until we are able to educate ourselves, I guess we are going to have to be in the grey zone with this.

So where do sweatshops exist? Any place where there is a vulnerable population, which is usually in third world countries like Bangladesh, China (still), Indonesia, India and I’m sure places I’m not even aware of because it’s very hush-hush for these manufacturers. Remember the Kathie Lee Gifford scandal in the mid-90’s about her clothing line? PR disaster.

And unfortunately manufacturing companies in these cities compete with others to offer the lowest price to make the garments to these gigantic corporations so if they don’t offer a good price, they don’t get the account. And sometimes the jobs are outsourced even further so that the big corporations can distance themselves from a scandal should it arise, and it has.

Thankfully there are people that are exploring the issue and putting it on blast. Films like “Behind the Swoosh,” a documentary about Nike’s practices, “This World: Clothes to Die For,” a doc by the BBC about the Rana Plaza building collapse in Dhaka, India in 2013, which killed more than 1,100 workers, to the latest one, “The True Cost,” are thankfully exploring the subjects but is anyone really listening? I mean where does it end? Yes, we want to pay the lowest we can for an item and corporations are giving us that but there is a cost to it. Not only the exploitation of people but also the killing of the earth. Faster and quicker comes at a price for all of us so how can we keep up the pace? I don’t think we can and at least I’m not feeding into the cycle … this week.

Here are a few links you may want to check out regarding this issue:

Something that got me off my butt to finish this story was this report about it on thezoereport.com just the other day.

I came across this while researching this story - Made In LA.

And from Huffington Post, 16 fashion brands that are “Made” in America.

15 Most Notorious Sweatshops of All Time.

I won't lie, I don't pay nearly enough attention to this subject. When I'm shopping I'm always hunting for a good bargain and I just don't think about how/where/in what conditions a product was made... I know I should, but I don't. I guess Is hould check out some of those documentaries on the subject. Maybe it will open my eyes a bit.

I think it's hard to admit! And yes, watching any of the docs will help for sure.

I am always looking for a deal when I go shopping. It's very rare (and very painful) for me to pay retail price for something. I'm always checking out Ross, TJMaxx, and the like. But I do enjoy going into Forever21, too, as their retail price is really affordable. And I LOVE their jewelry selection!

Hi Katie, I think women are just programmed to always look for deals when shopping!