I’ve been a tad obsessed with two things the past few weeks – the Dollar Tree and Pinterest. The DIY Craft category on Pinterest is just loaded with good stuff to try and tips to getting the most out of your craft projects.

And the Dollar Tree … need I elaborate? I’ve probably made about 10 trips to about 5 different stores since Thanksgiving and on one trip I saw these Barbie busts in the toy section that I just had to buy. I didn’t know what I would make with them but I knew I’d think of something. 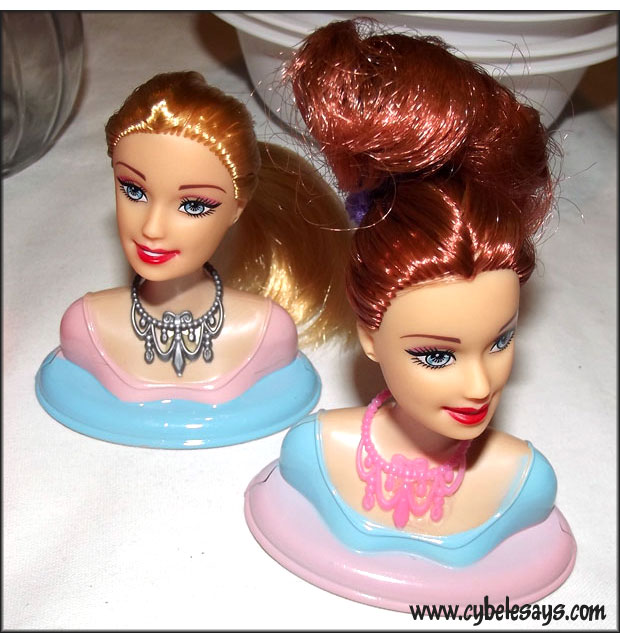 Then I started seeing more of these, these and these and thought I’ll make those at some point but I bet a Barbie busts would look fab on top of the two glass jars I just picked up at the Dollar Tree!

I knew I already had the glue, paint and embellishments in my crafting box, so all I needed was the time and I had it now between Christmas and New Years. Yes!

So how did they turn out? Click after the jump to see. This is a picture-heavy post! 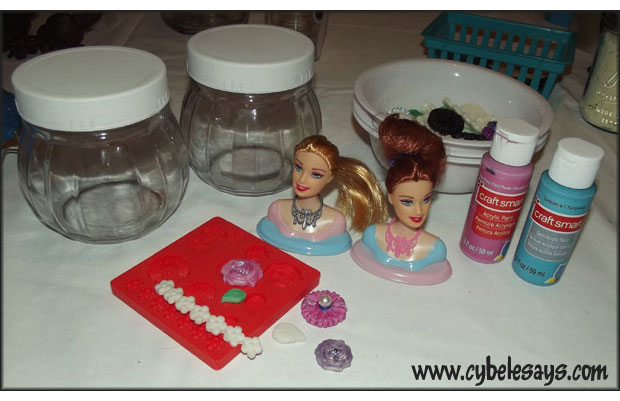 Since the lids on the jars are plastic, I had to prime them first with my trusty Rustoleum primer and let them dry. While they were setting, I checked the pink and blue paints I had to see how they matched up against the base of each bust and each was close but not exact so using a pointed paint brush I picked up from Daiso (they shed so I don’t recommend them at all), I traced the pink on the bottom part of one bust and then the blue on the other. That way the base of each would be seamless with the color of the jar top. 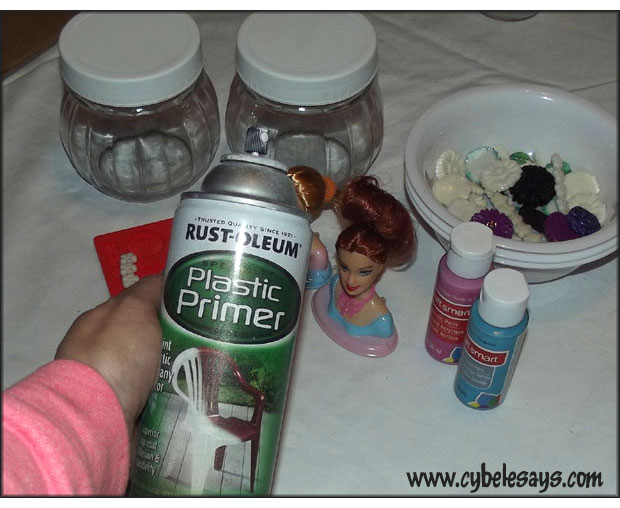 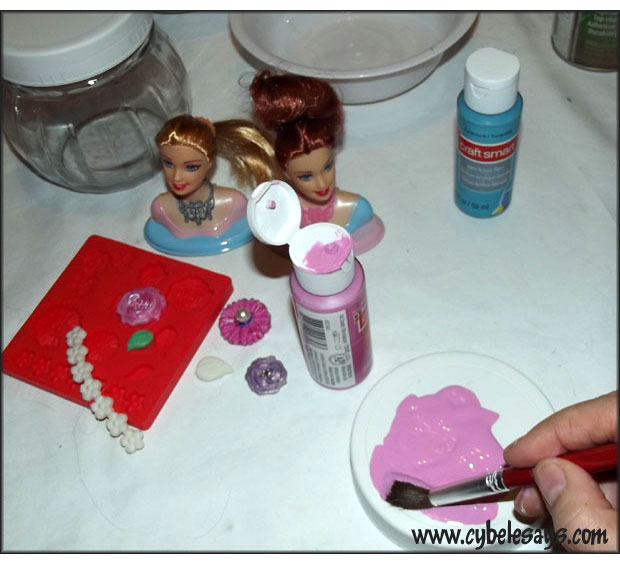 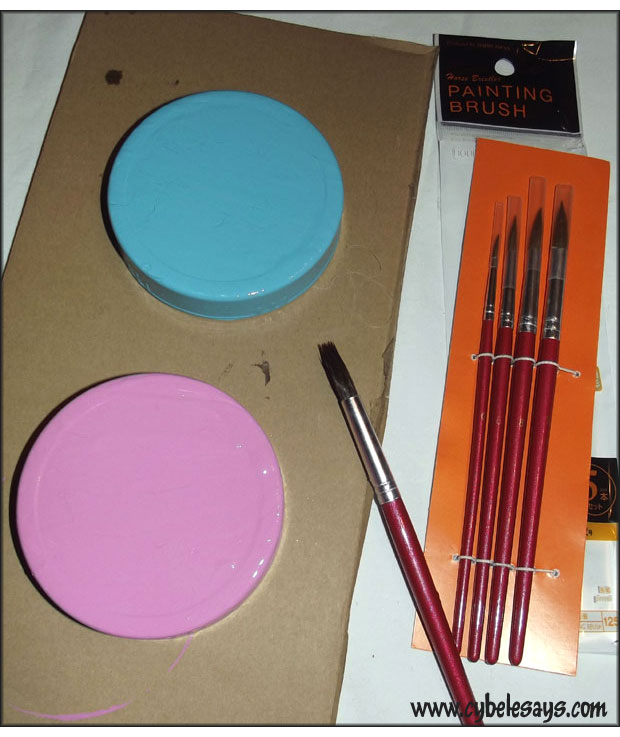 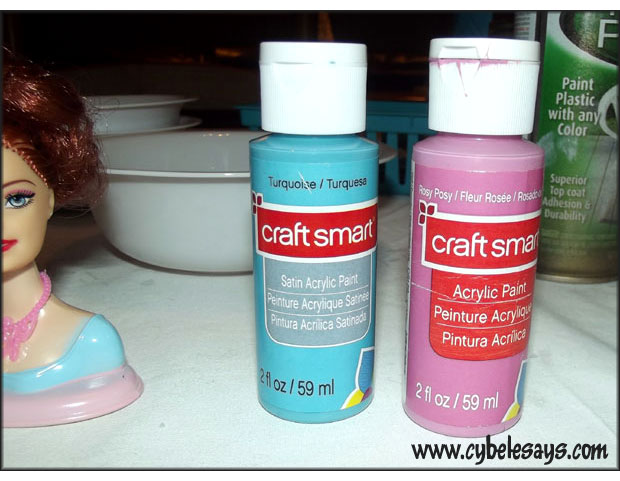 After two coats of paint on each lid, I used some Mod Podge to gloss them up a bit. And after each lid was fully dry, I attached each bust using my hot glue gun. Normally I would use E6000 glue since I’ve used it for just about everything over the years but I seem to be having more success with the hot glue lately so I just went with that. 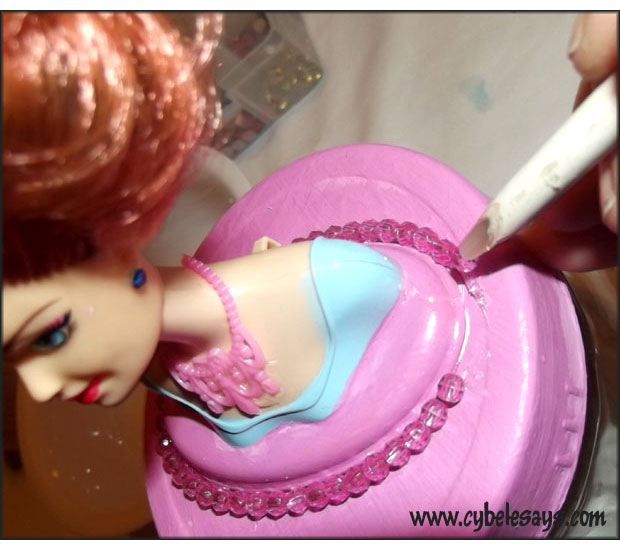 Now the fun part! How to gussy each jar lid up! I recently discovered Mod Melts after seeing this post on Pinterest and picked up the flower mold and a set of the Mod Melts sticks in White. I decided on using a flower melt painted in each’s trademark color on the front of the jar but couldn’t decide on the tops! I gave each Barbie Swarovski stud earrings and then went with some Swarovski crystals outlining the best of each bust – Sapphire AB flat backs for the blue one and Light Rose Beads for the pink one. And I used the E6000 with the crystals as hot glue doesn’t work to adhere them to anything. 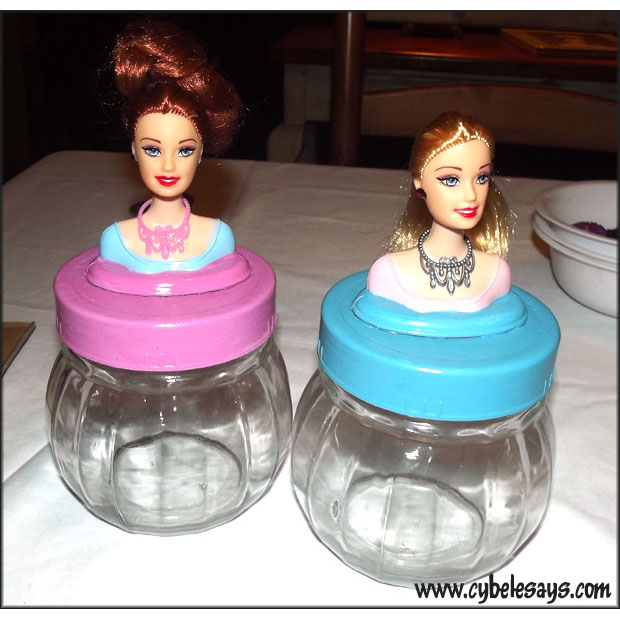 I already knew I was going to put cotton squares inside one jar and Q-Tips in the other so in the bathroom they went but not quite sure how I’m going to display them yet. Right now they are sitting next to a jar with flowers in it I made using this technique and my favorite Gucci factice. 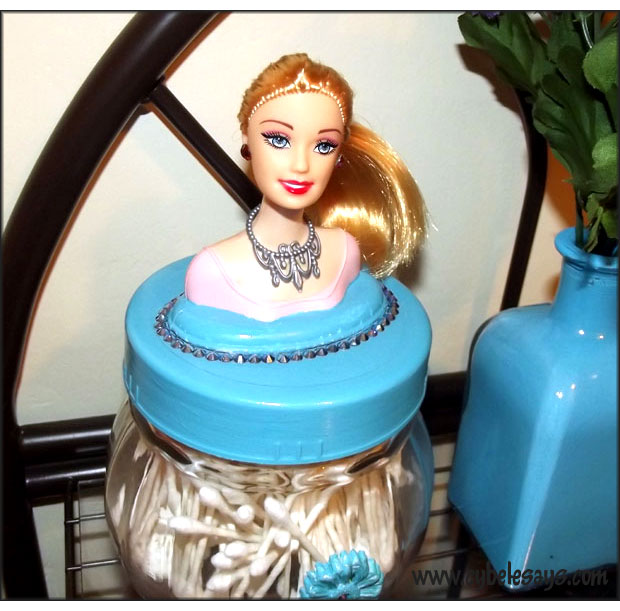 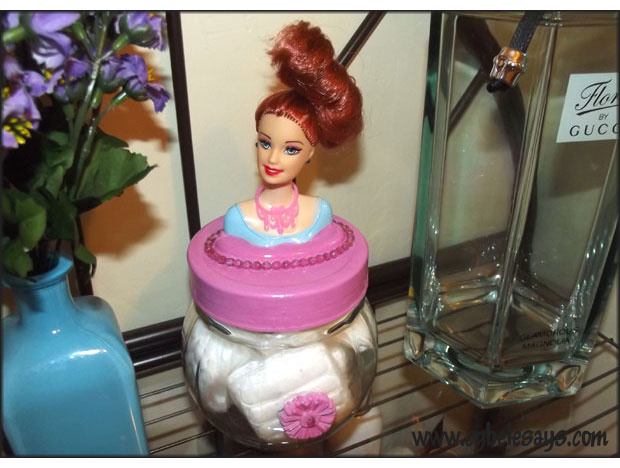 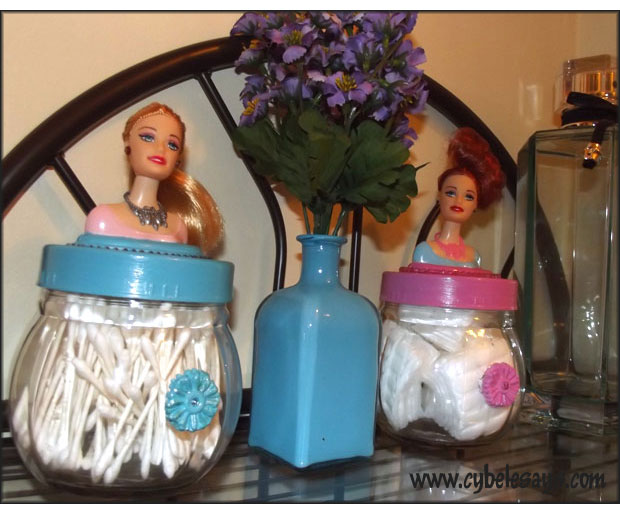 Overall I think they came out pretty good! Is this something you would put in your house?

Cybele, these are the BOMB!!! I'm just astonished that you figured out something so original and creative to do with those Barbie Busts.

Thank you for the super cute idea! My niece is 12 and she would love these in her bathroom...think auntie will be making these for her soon. :)

Hi MB, glad you like them! They were quite fun to make.

Hi Joods, check your local Dollar Tree to pick up the Barbie Busts because they can't be found in all of their stores! Happy crafting!