How to Flawlessly Apply False Eyelashes

I just started co-hosting Alayna’s Beauty Talk once a month (the next show is July 23rd and you can hear it live here. There are also links on the right side to hear past shows) and I talked quite a bit about false eyelashes on the show last week. It totally got me thinking about how long it took me to learn how to put them on and since I’ve gotten so much better, I decided to do a How To… on what works for me.

So up first, the lashes! I’ve tried probably about 20 or so different brands and in the end I just pick the majority of mine up at Ulta, CVS or Walgreens. Some brands will be made with real hair and some synthetic. Does it matter? I don’t think so but when you are looking at these different brands, look for lashes that look to have a really thin band or look at the different words on the box that will give you an idea of the band malleability (you’ll thank me later). 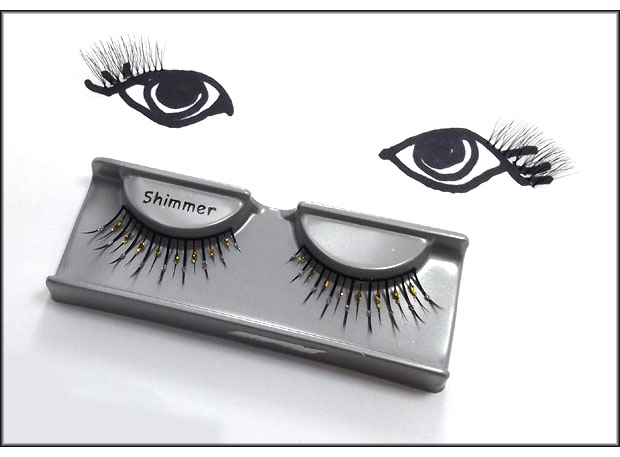 Like with the Ardell brand, they have the Invisiband collection and the LashLites collection, both telling you that the band is either invisible or really thin, which will help when you’re trying to get the strip close to your own lash line. You can obviously look at the lashes through the window to just see what the band looks like but these words will tell you that they went out of their way to make them easier (in my opinion) to apply.

As far as the prices go for a pair of lashes, they will run you between $4 and $9 (where to purchase listed at the end) and with the way that I apply them, you can reuse them about 3 or 4 times!

Ok, so once you have a pair or lashes or two, you'll need to pick up some glue. Now not all glues are the same and like the eye shadow applicators that come with eye shadows, if the pack does come with glue, it can usually just be tossed out. But know that most pairs of false eyelashes don’t usually come with glue anyway, so you won’t feel wasteful (I do remember a looong time ago that Make Up For Ever's came with a tiny glass vial of glue and it was one of my favorites). 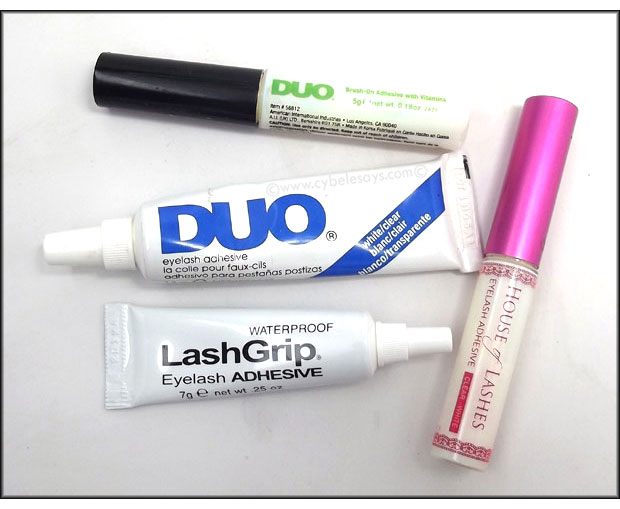 So let’s get down to the act of putting them on! First, apply your whole eye look, including mascara. Yup, do up your whole eye! If you are not planning on wearing an eyeliner or liquid eyeliner, I strongly recommend it if you are going to be wearing lashes and black is what I usually go with and the reason is this - when you apply the lash, you will want to get the strip as close to your existing lash line as possible. If you don’t, you’ll be able to see skin in between the lash strip and your own real lashes. The black liner will help hide that it’s not perfectly hugging your real lashes! 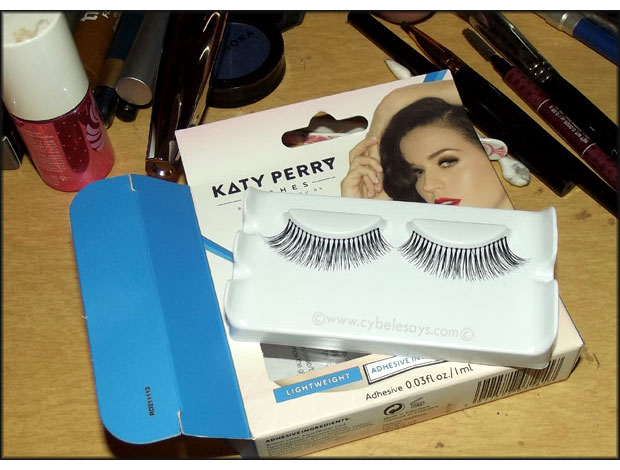 So after pulling them out of the package, hold one behind your top lashes to see how they fit from the outer corner to the inner. You’ll probably have to trim them a little but only trim them from the outer corner. Once you have both trimmed, holding one of the lashes in a pair of tweezers with the band side up, apply some glue to the band. Some people put glue on their hand and drag the band through it, some apply directly onto the band. I say, if you are going to use one of the tube glues, put it on the back of your hand or the packaging and drag the lash strip through. If you apply it directly from the tube, it will gush out. Believe me, I learned this from experience! This is why I sorta like the brush-on glues better and with the brush I can give each band an even application. 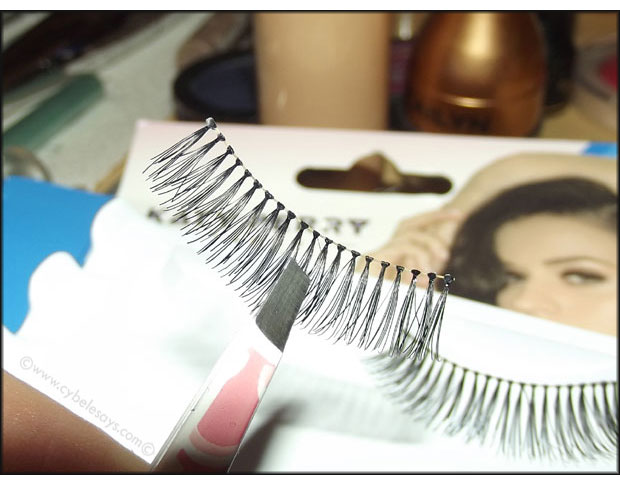 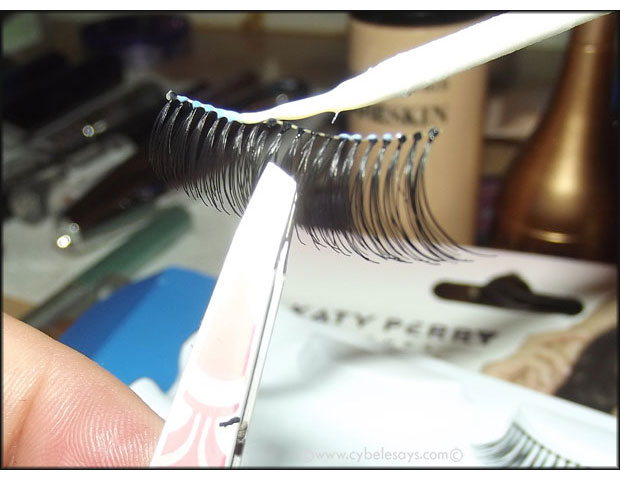 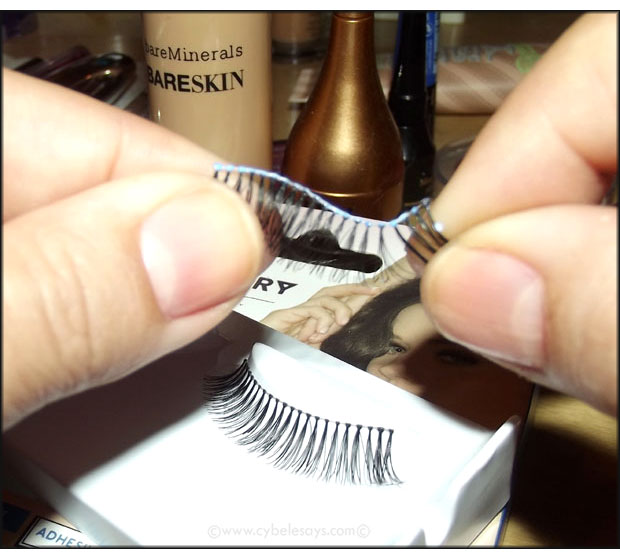 So you’ve applied the glue, and don’t be shy about how much to put on, so now grab each edge of the lash with your forefinger and thumb, like in the above photo, and just move it back and forth the make the band malleable. Do this for about 20 to 30 seconds so the glue can get tacky. Then, putting the lash back in the tweezer with the band side up, grab a mirror (a mirror inside a compact is fine), put it below your face and look down into the mirror. This will help make the line of your top lid look straight. Then lightly press the middle of the lash strip to the middle of your top lid. Then with your eyes still looking down into the mirror, move the tweezers to the outer edge and push the band to the lash line and do the same with the inner corner. Then you can look into the mirror head on and adjust by pushing the side of the tweezer along the lashes to help them adhere. I also sometimes put the real lashes and false ones in-between the tweezers and gently squeeze them together. Some people use an eyelash curler to do this but I’ve never had luck with using that technique. And now you’re done and ready for the other eye.

So now the big reveal! My favorite lashes! My criteria for my picks is solely based on quality (how they wear, how they spring back into shape after wearing). So some of these are for daytime and some evening. Believe me, as you can see from the picture of my false eyelash drawer shown after the lash pics, I’ve tried a lot of different brands out. 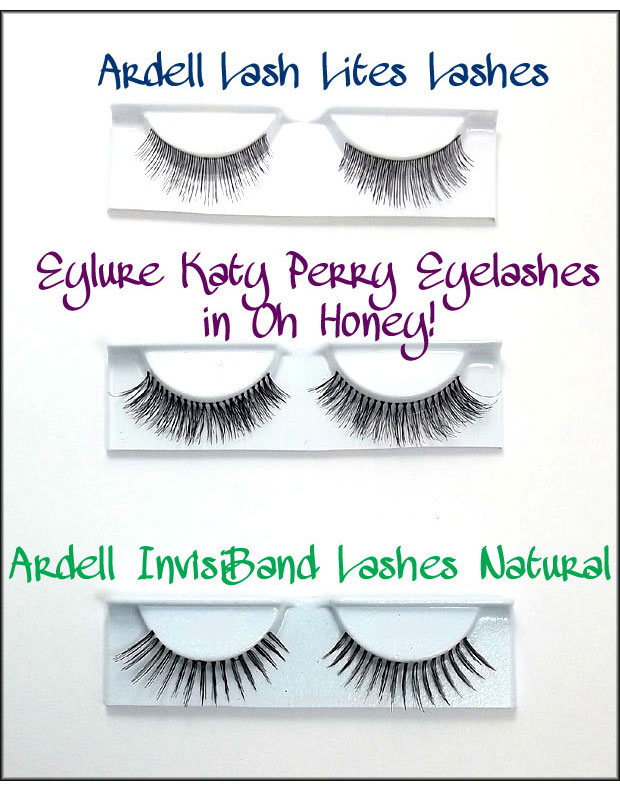 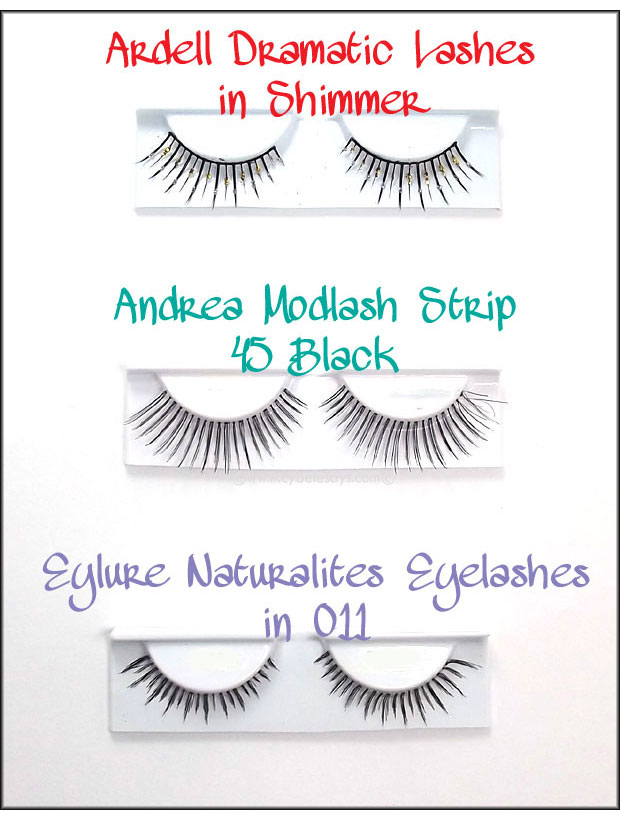 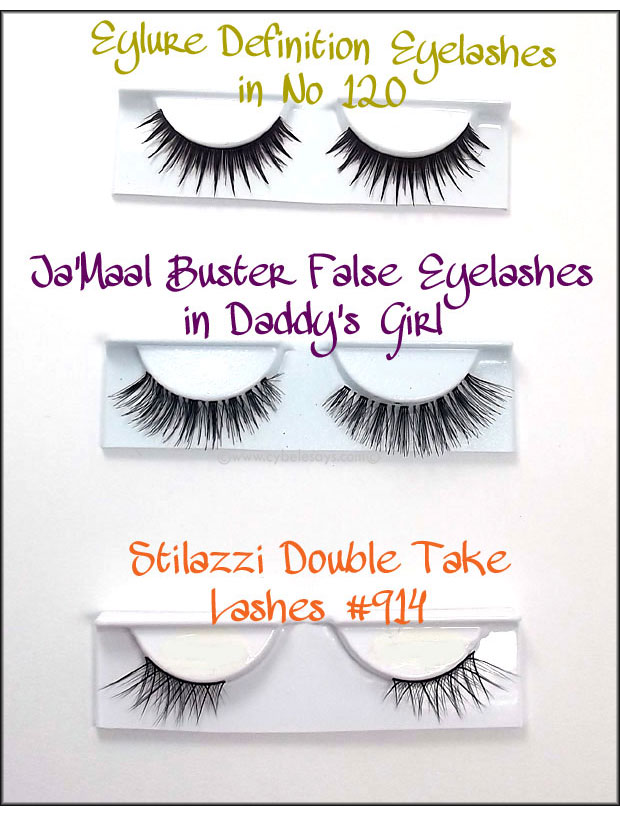 A few weeks ago when I was putting a pair of what I consider an uncomfortable pair of lashes on because the style looks really good (don't we do this with shoes all the time??), I had a revelation. I decided that I’m done with false lashes that have thick bands. What does that mean exactly? It means the band that holds all the lashes is too thick to nicely hug the lash line so upon this conclusion, I went through my drawer o’ lashes and looked closely at each pair of lashes to see what I was keeping and what I was getting rid of. Thankfully, it was only a few pairs of lashes I was purging. 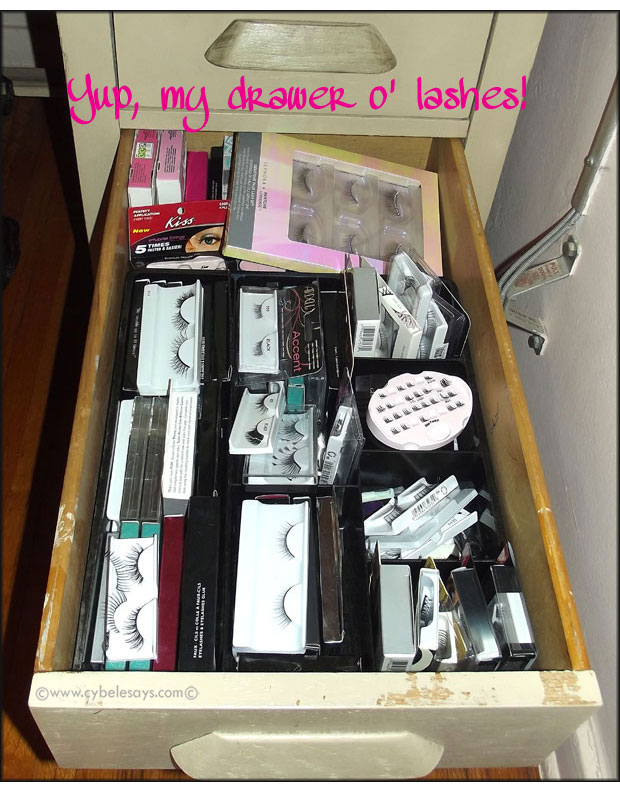 If you’re still not having any luck with the above technique (I tried about twice a month for about one year before I was able to get it down!), don’t fret, try a pair of corner lashes instead. They are about ½ the length of a regular strip of lashes and sit at the outer edge of the eye just giving your look a slight kick!

Brands I like for the corner lash are Stilazzi (picked up a couple of pairs at a trade show last year) and Ardell. One thing you may notice about the Stilazzi is that they seem to have a thicker than a strip of lashes band, but it seems to be ok when it comes to these corner pieces because they don’t have to arch or bend since they are going to be laid on just the outer edge of the eye.

The Ardell brand seems to make the most variety of corner lashes, which they call Lash Accents. If I'm in a hurry, these are better than strips because they are so quick to apply and great for when you’re wearing a serious cat eye. 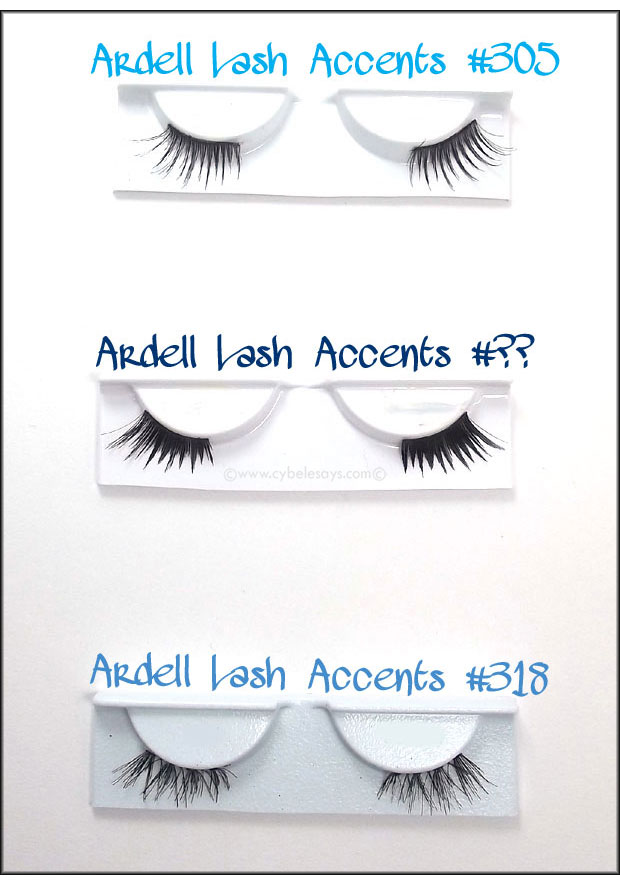 And I couldn’t do this feature without mentioning the individual lash packs. Pretty much every brand that makes lashes makes individuals ones. They serve their purpose but I like strips and accents better since I can actually apply them now!

I saw these last year that are a smaller-than-an-accent-lash-but-longer-than-an-individual-lash from Revlon, and the cluster of lashes work nicely too.

A few things I could do without when it comes to the overall category of false eyelashes. Crystals on lashes. They can't really be seen unless you close your eyes and who walks around like that? Another I can do without are the tools companies put out to try and make it easier to apply lashes. Like this one or this lash stand that’s supposed to help by laying out the lash in the curve of your eye. I’ve tried them all and none seemed to work for me. In the end, just a pair of tweezers did the job, but that's just me! You may find some of these tools usable so more power to you!

So as you can see there are many options out there so with a little practice and my technique I’m sure you will be able to flawlessly apply a strip false eyelashes in no time! Or maybe you'll try an accent lash instead.

Since it seems that most of us that wear false eyelashes have quite a few pairs, here’s an invention I think I need to come up with – an false eyelash portfolio so I can gaze at and easily find all of my lashes in the vein of this. I'm thinking a 3-ring sized binder with slots to slids pair into. The plastic piece the lashes come attached to when you buy them at the store would already be in the portfolio. You just have to take your lashes off and put them inside each slot. What do you think??

And also let me know in the comments if you have any tips to share about how you put on your false eyelashes?

And while putting this feature together, I found this site that lists sooo many different brands!

Great and very helpful post! I'm a false lashes newbie. I applied my first pair last week, and somehow had good luck. I used my fingers to apply them as using tweezers wasn't working for me, but I should try it again. Thanks for the tutorial!

Hi Allison, glad the timing of this piece is good! My fingers don't work well either so let me know how tweezers work.