How many times have you lusted after a gorgeous pair of shoes only to finally have a peep at the price tag and see that to have them will cost you one or two paychecks? For most of us, it’s just not a reality. But for some reason when I saw Sophia Webster Lilico Leather Flower Sandals, I immediately thought, “I can make these!” It’s not something I normally say to myself when looking at a pair of shoes but for some reason, that’s what popped into my head.

So I took on the challenge of recreating a pair of couture shoes that cost $595 for under $100. Here is the step-by-step on how I made them.

In looking at multiple pictures online, the only part that seemed like it was going to be a challenge was the scalloping of the leather around the heel. I contemplated a few things for it like wrapping a piece of pre-cup leather around the back of the shoe or attach something inside the heel that stuck out around the top. In the end, I decided there wasn’t going to be a way to do it seamlessly so I opted to forgo that part of the shoe but the rest would be totally doable.

The first order or business was finding a pair of skinny strapped ankle sandals. I opted for white as only part of the shoe that's light blue could be painted on. It took me about 5 weeks to find the right looking pair with the winners being these Shoe Republica heels shown below called Sansa (there is a price breakdown for everything I used to make these shoes at the end of this feature). The only alteration I had to make was to cut off the gold chain on the strap. Then they were ready for the transformation! 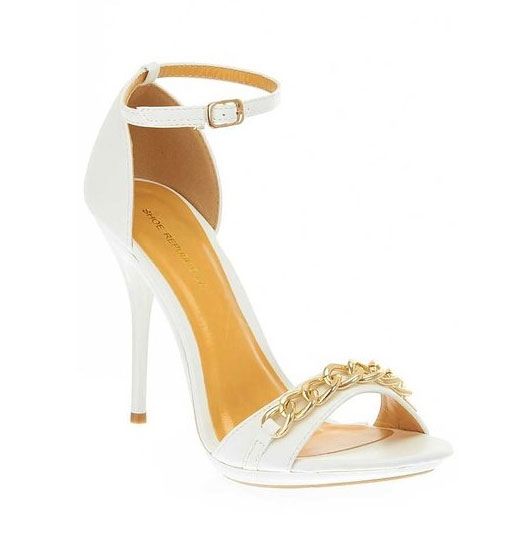 Now to gather the necessary materials -

For the dots around the heel and the strips on the heel, I went to Staples and Office Depot to look for stickers that would work. Believe it or not, I had the hardest time finding the less than ½ inch but greater than ¼ inch black dots so in the end, I had to make them. I found some foil stickers and I colored over them with black Sharpie. 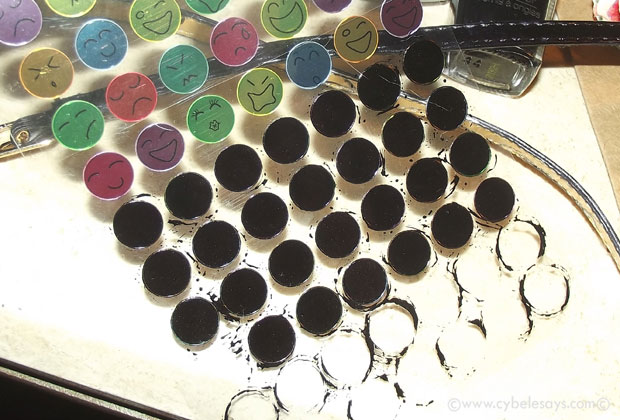 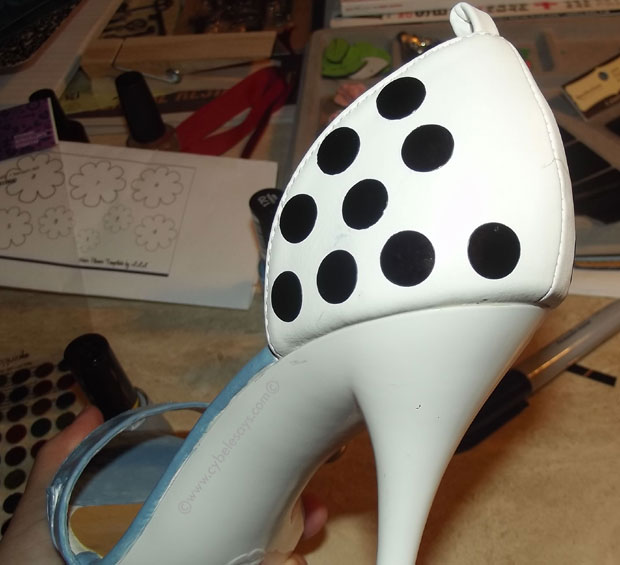 For the stripes, again I had a hard time finding the right width in black so I cut my own from a pack of chalkboard paper labels from Michael’s. In some places the sticker wasn’t adhering fully so I had to cut some pieces of matte scotch tape to put it around it. 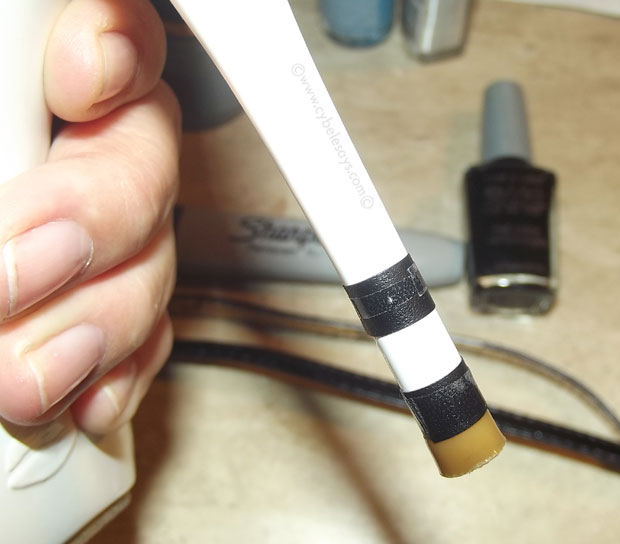 Next, the blue part of the shoe. That was easy!! I use nail polish on pretty much any art project that requires color. It’s perfect! It comes in many colors, is a manageable size (don’t have to buy a whole gallon), and now colors come in different finishes. So to find the right color, I trucked over to CVS and referred to the photos I kept in my phone of the shoes and looked for a light blue with a velvet finish since the blue on the shoe is not very glossy looking. 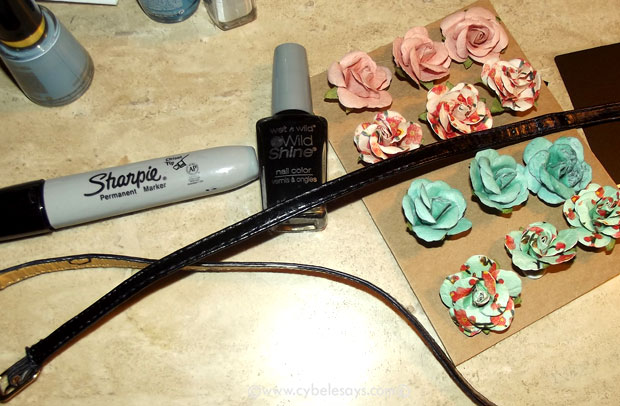 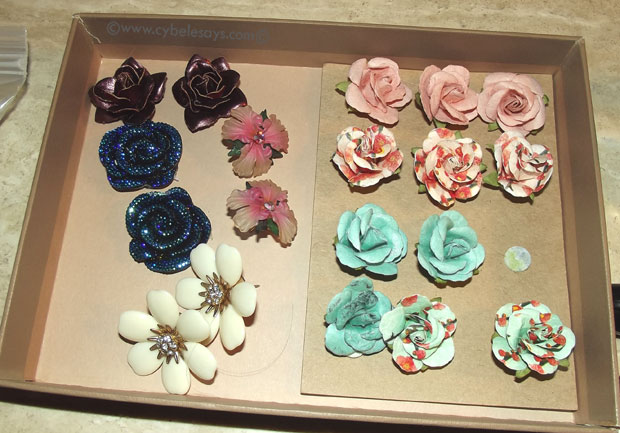 For the flowers, I wanted to put my own personality into it. I found one of the flowers used in a pack at Michael’s, one is a vintage flower that was an earring I had. 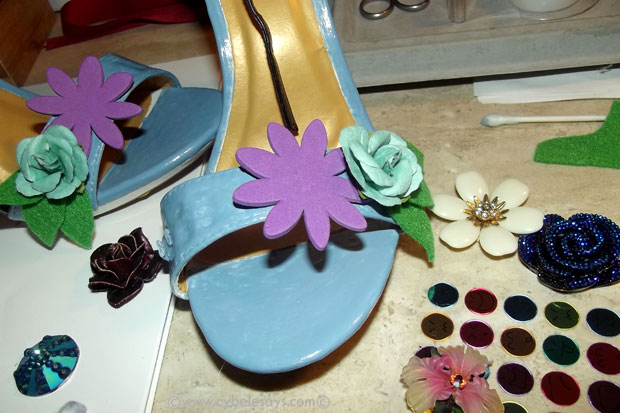 Under it is a piece of foam in the shape of a flower, I cut some leaves from some felt I had that hang on the outside of the heels, the pink flower trimmed with navy is a resin flower I picked up at Michael’s and painted with nail polish, and the round plastic disc with crystals on it in the inside part of the heel was something I had that I picked up sometime last year at Bohemian Crystal in downtown LA.

And to glue these pieces on, I used the trusty e6000 glue. I did try my hot glue gun with one flower but it didn’t work at all so I just used e6000 for all of them. 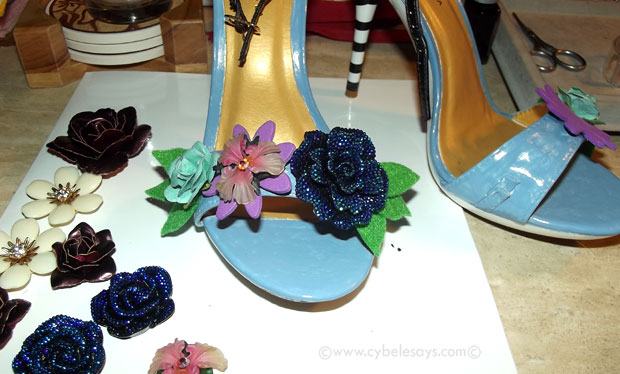 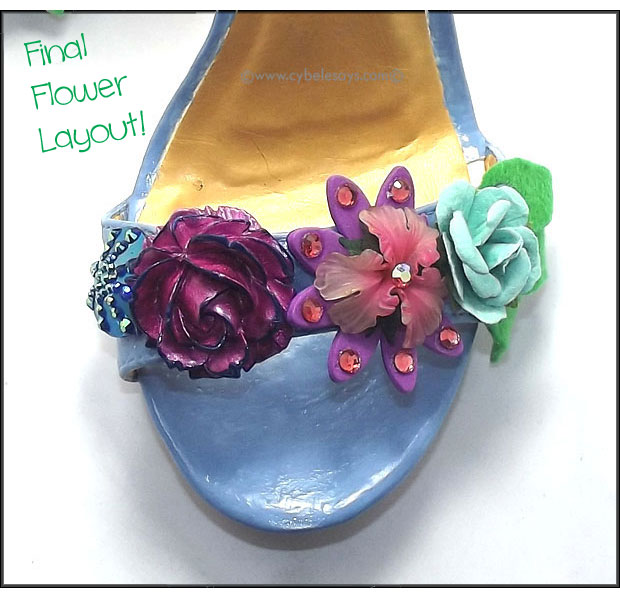 For the ankle strap, I used a Sharpie to make it black and then used black nail polish as the black Sharpie was not black enough.

And there you have it! 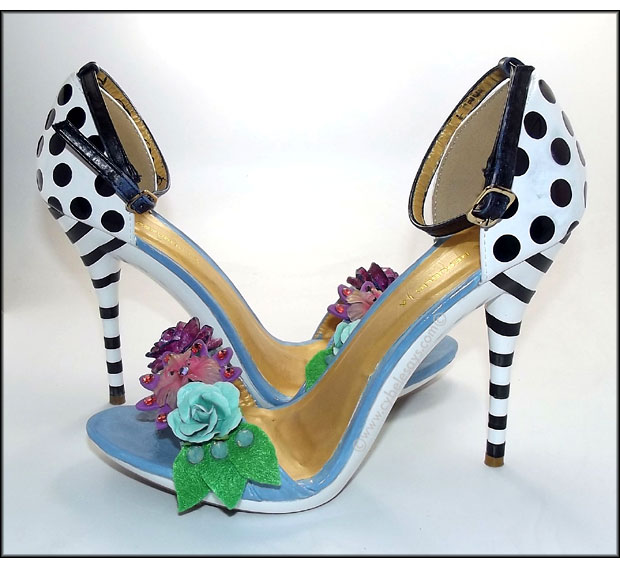 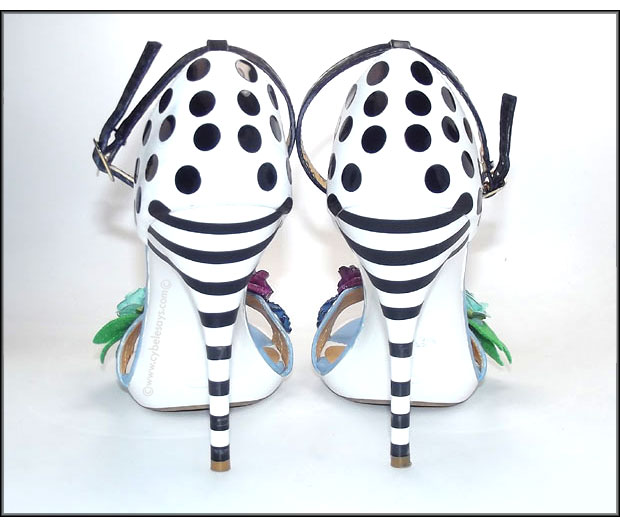 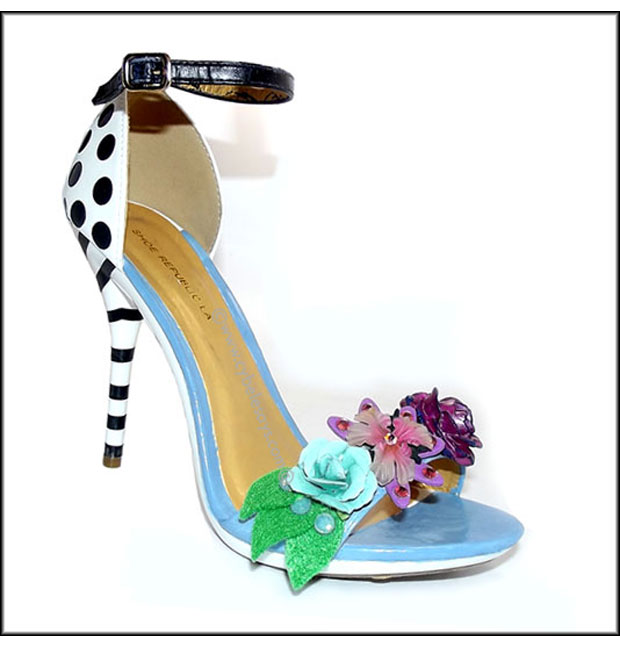 So what do you think? Will they pass? Leave your comments below!

Wow...great job!! I hope you'll put together an outfit of the day with these shoes.

SO SO SO CUTE! great idea!

What an amazing DIY! I saw these shoes in person on the feet of Miss Cybele and was blown away at how fab they were! Great job!

Thanks Joods, Eugenia and Tyna! Glad you like them. Hopefully I can find another pair of shoes to recreate!