This CAILYN Dizzolv’It Makeup Melt Cleansing Balm ($24/1.7oz @ dermstore.com) was one of the products I bought at the ISSE show last month. It was just being launched and was on the PR company’s buzz list. Truth be told, I was just going to buy it based on the name at first but then I got a demo from the woman working at the booth and saw it in action and wow, I had to get this one home to try out for myself.

I don’t really have a staple makeup remover since I oscillate between wanting one that is also a face cleanser to wanting one to use before formally washing my face at the end of the day. The latter one is mainly when I’m testing out a skin care line.

So back to this Dizzolv’It! I just saw on their site that they have a banner stating it the “No. 1 Beauty Gurus’ Favorite” but no link to who those Gurus are that are declaring this rather large statement. Ummm, ok … 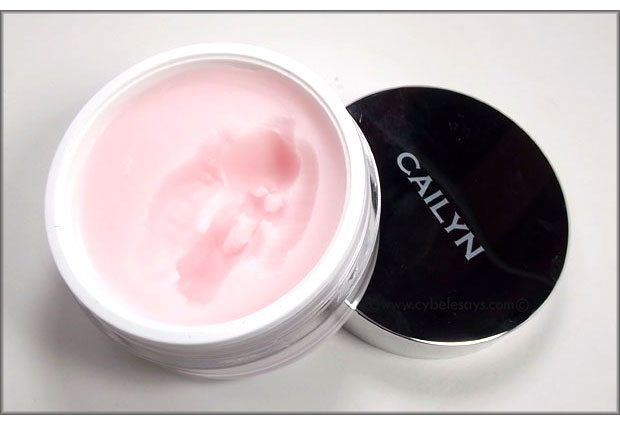 Scooping out a quarter-sized dollop, just massage it around the face and eyes to remove your day’s makeup and dirt and watch it turn from a light pink mushy wax to colorless light oil yet. But don’t expect your hands and face to feel greasy like a cleansing oil because they won’t. And the formula really does just lift the makeup off so that it easily transfers onto a washcloth to go right down the drain. No tugging or rubbing required! I was pretty amazed as I’ve experienced a product that essentially seems to just lift or melt off makeup like this. And I should also mention there was no greasy residue leftover like there is with my beloved Ponds Cold Cream from yesteryear.

So what ingredient/s inside this does the dissolving? Not quite sure but it could be the papaya enzymes (I would have assumed major eye irritation from that alone but none from this ingredient), or the glycerin, or aloe leaf juice, or the powerful antioxidant Acerola or some of the other extracts or a combo of them all! In any case, it does a good job at removing makeup and that’s good enough for me.

Are you in the market for a new cleanser/makeup remover? Or have I fully piqued your interest with this one? Do tell in the comments!

I'm definitely curious about this! I was told it was cruelty free.

I also don't have a HG makeup remover. I want something that does it all, but haven't found it yet. This sounds nice, but knowing this brand, it's gonna be expensive!

I use micellar water (I rotate brands) and cleansing wipes to remove my makeup. I haven't heard of this brand, catchy name 'tho!

I am growing more intrigued by cleansing balms by the day. I am a little taken aback by the prices on them, tho. :)

Interesting product, thank you for sharing!

OMG this sounds Dreamy!!!!! I think I need to try this. Great post!

Interesting. Thanks for the review.

YES! I want this! I have been using the Colleen Rothschild cleansing balm and I think I am completely sold now!

This sounds really cool, my interest is piqued!!!

I love it when it feels like the remover is dissolving the makeup to be removed.

My interest is definitely piqued! I love all the Cailyn products I've tried in the past.

I just got this at The Makeup Show! I was super amazed

I keep hearing about cleansing balms but I am not a fan of products in jars so it instantly puts me off.

Hi Kimmi, I am so curious as to why you don't like products in jars? This one is in a plastic container and I think of a jar as made of glass. I know it's a stretch but does that count too? :)

Hi Chrissy, great! Will look for your review on it then! It is a game changer I think.