I find myself wanting to know what’s inside the products I’m using. Take the new Vanda Orchid line from JUNE JACOBS. I tried the Vanda Orchid Body Balm ($60/7oz) and the Vanda Orchid Shower Gel ($35/7oz) and I really liked both (both @ dermstore.com). They smelled heavenly and worked well. The Vanda Orchid is native to Northern Australia and Eastern Asia and is one of the rarest forms. The extract from the flower contains high levels of anti-oxidants and fortifying minerals. But with these two, I really wanted to get down to the nitty-gritty. 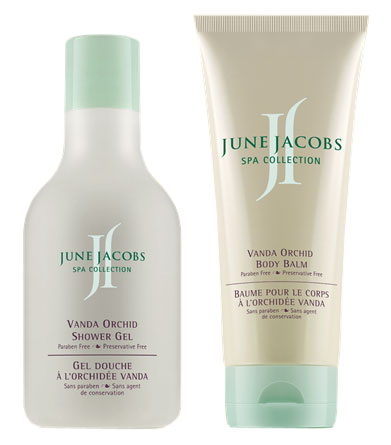 Let’s take the balm and really dissect it, shall we? (I randomly chose which one to go through out of the two). It contains Shea Butter, extracts of the actual Vanda flower, skin nourishing oils like sesame, squalane, jojoba and even has a patent-pending blend of anti-oxidant blend of green tea extracts. There’s no parabens, preservatives, synthetics dyes, petrochemicals, or sulfates. All sounds good, right? I couldn’t help notice the thirteen ingredients listed before you get to the good ones listed above, and they’re words I can’t even pronounce. I looked each up and while none are in considered really hazardous and are mainly skin conditioners, binding agents and cleansing agents, it was a little daunting to see the long words. I just wish companies would be more up front as to what the ingredients do that they use like put each in parenthesis so the consumer knows what it is when they scan the back of it.

Now I’m not slamming the June Jacobs line as again, I just want to be upfront with my reviews as to what’s inside as it matters to some and not at all to others. I mean anyone can take a product, try it and then report back on if it works but not many take the time to go through the ingredients for you and I just want to take that extra step as it's becoming more important to me.

Disclosure: Samples of these items were provided to Cybelesays.com for review purposes.